On the 3rd of November the Italian Alborosie is coming to Prague! He is coming with his band Shengen Clan and also with his new album Freedom & Fyah, which he presented already at many European festivals.

The first Italian reggae artist to be internationally recognised, Alberto D’ Ascola (aka Alborosie) was born in Sicily in 1977.
He formed his first band “Reggae National Tickets” in 1992 and they quickly reached success selling more than 200,000 records. They were the first Italian band to play at Sunsplash and Sumfest in Jamaica in the Nineties. After their success in Italy, Alborosie moved to Jamaica in 2000. His friendship with John Baker (ex-producer of Pm Dawn and member of Island Records) was decisive: he began to work in Baker’s Geejam studio in the Jamaican countryside and, little by little, he worked as a sound engineer and producer for international artists such as Wyclef, Angie Stone and Sisco.
He also recorded Manu Chao and Nubians at the time of their visits on the island.
Thanks to his talent as a producer, he managed the group Digicel Rising. After this experience, he labelled his first record Alborosie on his own label Forward Music in 2004. 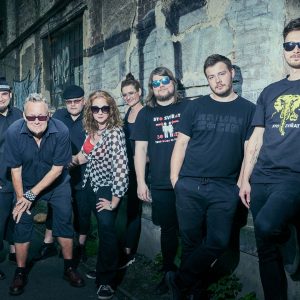